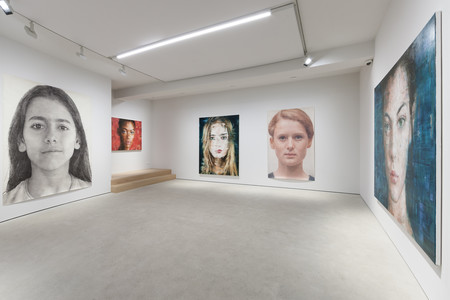 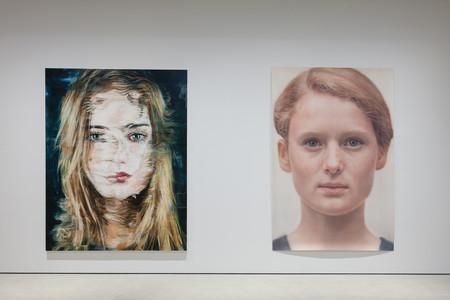 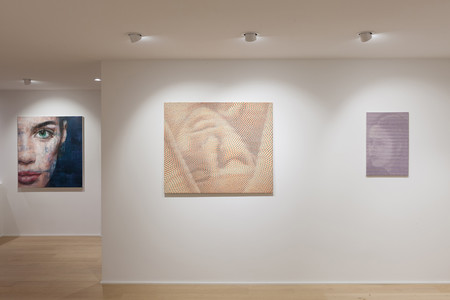 Galerie Jahn is opening an exhibition with works by the internationally renowned artists Till Freiwald, Andreas Lau and Harding Meyer on Wednesday, 28 February. The exhibition has been designed in collaboration with Harding Meyer and continues the tradition of engaging with the artistic subject matter of realism in painting.

The portraits painted by the three artists in the exhibition all belong to the tradition of portrait painting on the one hand and have a strong character of reference to contemporary conceptual art discourse on the other hand. Up until well into the 19th century, portraits were almost exclusively commissions that were primarily used to depict the client’s power. They were often an expression of outstanding wealth or portrayed exceptional acts or charitable deeds. This tradition declined in the 20th century though and the classic form of the portrait was replaced by the photographic portrait on paper first of all and then almost completely by the digital version on the Internet or in social media. While a representative or functional narrative was attributed to the portrait in the past, today’s digital form presents a multitude of different information including an individual’s habits alongside personal details. The digital self-portrait (also known as the selfie) has taken the place of the personal picture. The information related to the portrait is more comprehensive and doesn’t just visually depict the person but captures them in all their different facets. With a modern painted portrait, we are therefore no longer dealing with a commissioned work of art, an intended narrative, but rather a comprehensive digitalised package of information that the captured subject cannot control making them more like a subject that is being directed. A digital photo has become a code behind which a whole personality is hidden.

Harding Meyer creates his portraits using a traditional artistic painting process first of all. Due to the way the work is produced, its size and virtuosity though, viewing the picture produces a strong sense of irritation and a different experience to the current deluge of digital portraits. The aim is not perfect reproduction or realism, but rather people looking at the observer through a shimmering matrix of different overlapping information and narrative. Approachable and ready for communication but strangely inhibited. Till Freiwald’s watercolour portraits take common notions of watercolour technique to the absurd simply due to the sheer size of the subject. The artist’s consummate reproduction and extremely high degree of realism are astounding, in particular when you consider the stoically precise laser technology. Freiwald himself describes his artistic approach as being like a dialogue: “Working with a model can be like looking in a mirror; my view of the model is captured in their gaze.” Andreas Lau works with different sequentially conceived pictorial strategies from the modern era. He virtuously cultivates the technique of pointillism and op art in his works. He doesn’t do this in the same way as his contemporaries in the art movements mentioned though, but applies it using a compendium and background understanding of today’s technical possibilities. Nowadays, you can produce all kinds of effects in no time at all using basic image processing programmes. The fact that he uses the traditional, artistic technique of painting despite these possibilities, provides the first insight into what he requires of painting and art. The artist questions the portrait against the backdrop of media noise by leaving the portraits behind the matrix, similar to Harding Meyer’s interpretation.

So according to Wolf Guenter Thiel, when we’re talking about this exhibition and considering how its portraits differ from their historical predecessors, they are not commissioned portraits that are to symbolise beauty, social power or respect as the narrative. They are rather pictures of a research nature into the human image and into what constitutes the image of people today. For example, Harding Meyer sees the picture receded behind a digital matrix. The narrative attached to this digital picture is composed of all kinds of possible collected data that produces a superimposed picture of people. The person portrayed is no longer the master of their public image and others’ perception. Till Freiwald on the other hand takes the approach of a holistic view of the person, getting a picture of the person himself and producing it with an exactness and definition that are unusual for today’s images. The speed of producing pictures / selfies is clearly contradicted by the carefully, empathetically and slowed down picture. Andreas Lau in turn picks up on the idea of the picture as a digital image based on bits on the one hand and an information matrix on the other hand and tries to tune this perceived noise as if using an artistic synthesiser. The noise is interpreted as a sequence and recomposed. Resulting in the abstraction of the picture and a new harmonious, in itself coherent picture. A synthetic abstraction, if you like. The exhibition gives the observer a view of the current human image and the image of every individual human. It is fascinating and alarming at the same time. Caution is called for when handling and publishing your own image. Creating an awareness of this is a highly topical contemporary discourse of great importance for every single individual.