One person can always be seen. Solitary, forced to reflect on themselves, absorbed in themselves, hardly noticing us viewers, living in their own (pictorial) world. They are mostly women, now and then also men, often naked, at the mercy of our gaze. This does not seem to bother them. They stand or lie, with their hands propped up, on smooth, reflective surfaces that lead to a duplication of their bodies. They surround sections of a rich natural landscape, which seem to belong to a different reality though. Martin Schnur knows how to create rich artistic visual worlds in which we like to immerse ourselves and linger.

Various levels of reality, composed into a multilayered whole, are a characteristic feature of many of the Austrian artist’s paintings. A second, clearly marked level of painting is inserted into a natural landscape; in an interior with people a picture of the exterior space opens up. Schnur combines several motifs into one picture with representational finesse and yet leaves them autonomous.
Martin Schnur, who originally studied sculpture, taught himself the craft of painting. It is therefore not surprising that the staging of the body in space, the play of the surface versus three-dimensionality, features significantly in his works. The blending of spaces and atmospheres, the ambivalence of geometrically delineated fields and depth effects give the compositions an additional intensity, comparable to that of optical illusions. The connecting element of the different levels of reality is the light moods and reflections. The light becomes a protagonist of the painting.
Schnur is an outright painter here, emancipating himself from a sculptural world view.

The sterile interiors contrast in form and content with the colourful landscapes. The person is in the middle and on the outside at the same time. Thrown into nature and yet not seemingly part of it. Preferring to reflect on their own countenance. Do they not notice the surrounding beauty of the forest? Is it outside their area of life? Is this a criticism of a self-centred world view, of a person who has lost touch with nature?

Only once, in “#Barrier 2”, does the naked female figure seem to belong to the same reality as the landscape. The woman walks carefully over a puddle of water, logs swirl wildly through the air, dark silhouettes of trees can be made out in the background. The reflection is different: the warm sun breaks through the lush green of the trees and bathes the forest in a warm, harmonious light.

Schnur begins his artistic work by exploring suitable locations and selecting models. The latter usually come from the artist’s circle of friends and acquaintances. For interiors, he chooses demolished houses and empty flats; for landscapes, he looks for wilderness that is as untouched as possible, as far as it still exists: natural forests, river courses, ponds, and often finds them in the Danube floodplains near Vienna.
Together with the model and camerawoman Daniela Beranek (who he has been working with for many years) and with the help of a large mirror, the ideal setting is then set up for photographic shots. These are meticulously prepared, even poses and gestures are not random or improvised, but carefully staged. Schnur draws inspiration for his paintings from the resulting images and transforms them into multilayered compositions beyond purely photorealistic pictorial works.
The artist plays with different proportions, where delicate spider webs and small leaves appear huge, and lighting moods, where the artificially lit interior meets natural sunlight. He tilts sections of the picture in any direction and abstracts figurative details. “As a painter, I'm allowed to do that,” Schnur emphasises with a wink.

Tranquil ponds, wild, rampantly growing trees and shrubs, bathed in warm, diffuse sunlight whose fine rays fall through the branches and leaves: Schnur’s painted landscapes give the appearance of being pure and untouched by civilisation. They look idyllic, almost surreally beautiful. The artist’s awareness turns nature into landscapes, into his very own personal view of the landscape.
This landscape touches the person to the core, serving as a vehicle to convey the meaning of nature, of distance from civilisation or even of a vision of paradise. On the one hand it seems familiar, but on the other hand it remains alien in its autonomy, its independence or even its uncanniness. Schnur’s landscapes do not offer the wide panoramas and perspectives we are familiar with from Romanticism; they are like details and fragmentary, close to the wood, the water and leaves.  He thus breaks with the expectation of a romantic depiction of nature and instead enjoys the inexhaustible diversity of form and colour in nature, suitable backdrops for his virtuoso play with light and shadow, with reflections and shading.

Let us return to the people depicted: they tend to be young, in casual clothes or even naked, and are  usually placed in the foreground. But they do not appear self-confident or dominant at all. Vulnerable and unprotected, they face our gaze and yet remain unapproachable and alien. They seem to be at one with themselves, lost in thought, sometimes melancholically absent or detached, following a different sense of time and space.
Pausing in various poses, as if their actions are frozen, as if they are taking a break for a moment or waiting for something. Without a narrative context they seem isolated and fragile. Silent and withdrawn, they do not make contact with the observer, are usually turned away from them, communication is denied. The person behind the image cannot be grasped, their personality, their character remain hidden.
The paintings only have a limited portrait-like quality, because a portrait’s remit of not only representing physical resemblance but also capturing the personality, is not the focus here. The sitters are indeed individuals, but at the same time they can also be seen as symbols of the isolation of the individual as such: lonely, introverted, usually rather passive. So is Schnur picking up on a modern-day attitude to life? The artist deliberately leaves this open, does not want to be too unambiguous in his pictures.

Schnur uses an unusual surface in several smaller works, painting on copper plates. The old masters liked to use this material, but it is very rarely used in contemporary art. Wrongly so, as the artist impressively proves: the smooth surface requires a different painting style to a classic canvas. And the reddish colour of the copper that constantly slightly shines through, lends the paintings a rare beautiful glow.
There are three works that stand out somewhat in terms of the theme. “Heat #1-3” show a burning forest, dense clouds of smoke, charred wood, palpable heat: humankind and nature are now united in one picture, but that does not bode well. According to the artist, the forest fires in Brazil were the catalyst for this series. The destruction of the Brazilian Amazon rainforest by slash-and-burn has increased dramatically in recent years. Schnur treats the subject mindfully. His motifs are simple but effective. We see the little person against the backdrop of the vast jungle or brought close, amid still blazing pockets of fire.

The images remain ambiguous. Is a fire being started or extinguished? Was the fire possibly not caused by people, but maybe by intense heat as a result of global warming (which would indirectly make humankind responsible again)? This question, too, is left unanswered. And here too, Schnur continues the now familiar, so adept play with various levels of reality with a little accent.
A shining silver, purely geometric surface, like a foreign body (or is it a mirror?), pushes itself into the composition and lends the pictorial motifs an artificial character. With the white gold used for this purpose, he succeeds in making a beautiful reference to art history, as the material gold is of key importance in early Christian, Byzantine and medieval art. It only disappeared from studios in the 15th century and was not rediscovered by artists as a means to convey expression and meaning until the beginning of the 20th century. Since then, gold has experienced a “renaissance” as a colour and material that has lasted until the present day.

Schnur is aware of the significance of this very special material, of its strong attraction and fascination. He knows about its lasting preciousness and durability, its transcendental weight, its unique light and colour effect. And he knows how to use it for his pictorial worlds. The gold band disrupts the figurative image and at the same time hallmarks it as an act of painting. We do not see reality, nor do we see an image of it.
We see the reality of painting. Because in the end, the artist is mainly concerned with painting a good picture. Humankind and nature serve the artist as an experimental field for a way of painting that can create a new reality, poetically as well as sensually, using light and shadow, surface and space.

This is how Martin Schnur paints images of people, distanced and unapproachable and yet also of quiet intimacy.  He paints nature pictures, cropped and fragmentary, full of light and bright colours, also wild and unbridled. Always masterfully realised, sensual, vibrantly coloured and carried by an unmistakable signature. Pictures that delight and move us for a long time to come. 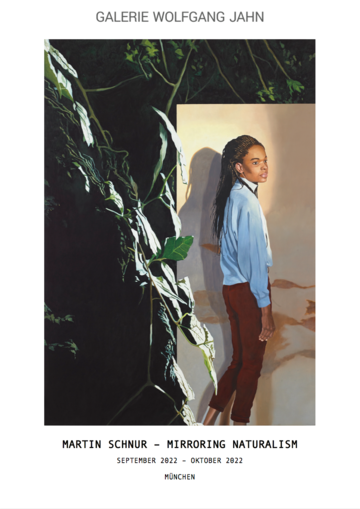 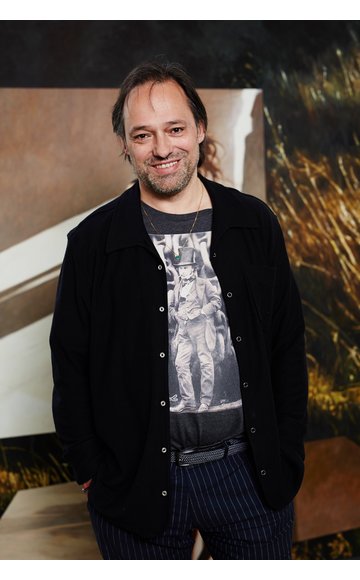