Discourse on German landscape painting is a key aspect of Carsten Fock’s artistic work. The artist, who grew up in the former GDR and fled to the Federal Republic in 1988, combined addressing his own biography and critically questioning East-West painting in divided 60s and 70s Germany in his paintings and painting installations for decades. In doing so, he referred to greats such as Gerhard Richter, Georg Baselitz and Sigmar Polke, who had fled from the former GDR and studied in the West with representatives of German Informalism, as well as to Günther Förg, his teacher Per Kirkeby and the painters of German Expressionism.

For Fock, landscape painting was always historically a subject contaminated by art history, associated with reflections on Germany’s past, nationalism, war and division – but also on the force of modernity. Fock’s paintings attempted to be formal, analytical, pop-cultural commentaries, “painting about painting” – but also to develop something like an inner vision of the present. In doing so, he repeatedly addressed the ideological role of art and the artist, the balance of power that painting represents.

Between September 2020 and January 2021, during the second wave of the coronavirus pandemic, a series of medium-sized paper works in 40 x 30, all drawn with the fingers, are created in Vejby, Denmark. These non-objective drawings mark a clear break with this artistic practice. Fock arrived in the small town on the Kattegat in a state of personal and artistic crisis. This first cycle is about the both artistic and existential question: What do I need? What do I have to let go of? It is not about what was or is to come, but just about what is. In these works, one senses the formal dissolution, the literal letting go of expectations, of role models and emulators, of the knowledge of art history, of the painting citations that were otherwise always necessary, like a railing to hold on to because the floor is slippery. As in the very recent works in the “Zum Meer” (To the Sea) exhibition, the masculine, the trial of strength, the playing with sublimity is already missing in this 2020/2021 cycle. Something indeterminate, genderless, boundless has taken its place. Fock’s painting looks at the horizon, registers or recalls lighting conditions, colours, the weather, times of day, temperatures. It is about very rudimentary, physical perceptions, which the painting evolves from, like the essence. But the images that emerge in Vejby are bottomless. Fock creates almost infinite colour spaces, landscape painting which the landscape disappears from, or is at least brought back to zero.

“To the sea” does not mean a return to pure origin, a return to supposed nature, which in the Anthropocene is inseparable from human culture anyway. What is meant is rather the path to emptiness, to openness. Letting go of history and stories, giving up control, demarcation. The drawings in the current exhibition were created in the period following this first stay on the Danish coast – in Bamberg, where the artist now lives, in Bad Gastein in Salzburger Land, and on his return to Vejby in early 2022. Fock’s most recent works are hybrids of drawing and painting. Especially the large-format works, created in Vejby now, are even more reduced, touching on the fringes of concrete art. Fock’s paintings still have a certain rapture about them, especially when forms appear that could be reminiscent of the figurative, of plants, clouds, rocks. But at the same time there is an almost meditative sobriety. These pictures do not really refer to anything tangible. They do not reflect any emotional states, they are detached as far as possible from the specific, from people, places, things, one’s own biography.

The Watzmann painted by Caspar David Friedrich, the Alpine panorama of the Berchtesgadener Land in which the Führer staged himself at the Berghof in Obersalzberg, the towers of the border fortifications between East and West – these were German landscapes that Fock dealt with in previous decades. They were always historically and culturally charged, dramatically staged, a kind of setting or backfground for the painting. In Fock’s painting, the perspective was also always a political commentary, an act of self-empowerment, a kind of heroic balancing act between a formal and therapeutic experiment, invocation and expulsion. But in his more recent works, created from the end of 2020, this relationship is radically reversed. With the return of speechlessness. It is now the landscape that looks into the soul. 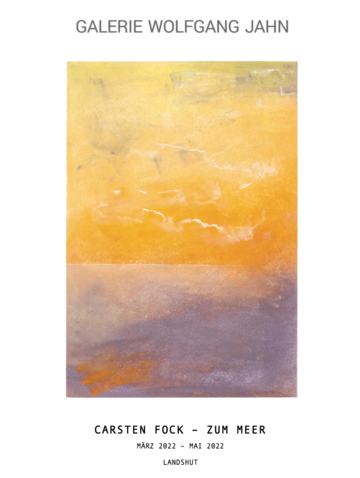