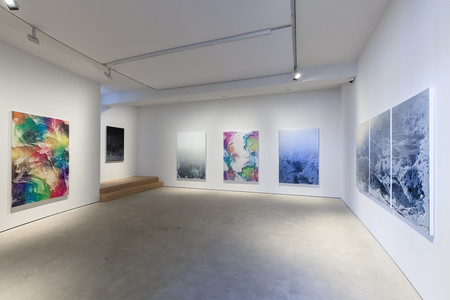 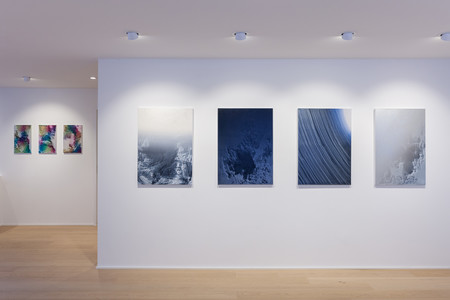 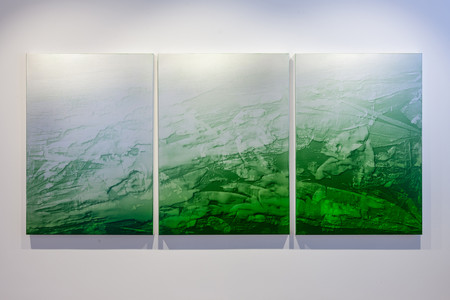 Galerie Jahn is presenting the second solo exhibition by the Dutch artist Martijn Schuppers with “Cassini”.
The artist's works captivate with their apparent depth and suggest the representation of a terrestrial abstraction to the viewer. Schuppers creates this through the use of various techniques and materials, where the images appear at the interface between complete abstraction and total representationalism. The more or less accidental discovery of one of these extraordinary painting techniques is described by the artist as follows:

“One day I painted over an old problem with a new coat of transparent paint. I was unhappy with the result so I threw some turpentine over it which resulted in part of it dissolving. One would then usually pick up a cloth to remove the paint. This time I did it with a brush out of laziness, from left to right and top to bottom, and so the process was born.”1

When you look at Schuppers’ works, which appear to be in photographic quality at first, you can see landscape-like surface formations in his pictures that can be interpreted as oceans, craters or even very characteristic landscapes. The viewer has the feeling of discovering the realistic looking pictures from a bird's eye view. However, the artist's representations are not in fact realistic photographic surfaces but classical abstractions that show nothing other than the tectonics of colour on canvas.

One striking difference to the images of planets and craters we are familiar with is that they do not hide any details. But it is precisely these kinds of pixelated images that become empty spaces, stimulating interest and imagination and encouraging a variety of models of interpretation. They equate to fantasy and not a realistic view. The same applies to Schuppers’ pictures: they stimulate the imagination! Schuppers’ pictures don't hide anything. They're just such fantastic placeholders.

Martijn Schuppers was born in Almelo in Holland in 1967 and studied painting at the Academie Minerva in Groningen and at the famous Hunter College in New York. Today he teaches painting at the Academie Minerva himself and has been presented in numerous solo and group exhibitions worldwide for the past 20 years. He is among the most internationally famous representatives of concrete abstraction in his generation. Schuppers lives and works in Groningen. 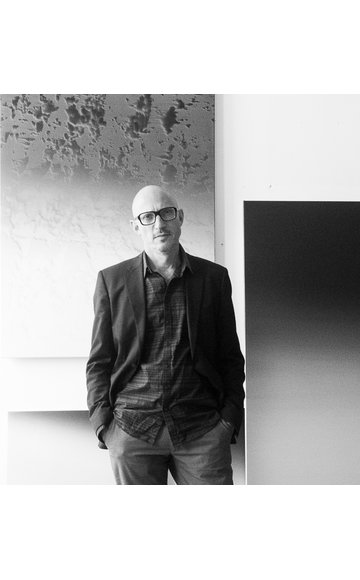