Parallel to Leif Trenkler’s “Coloured Beauty” solo exhibition, with which the Bucheim Museum near Munich is currently honouring this artist’s work, Galerie Wolfgang Jahn is now also showing selected works under the title “Sehnsucht” (Longing), which provide an impressive insight into his current work. Leif Trenkler, born in Wiesbaden in 1960, studied painting at the renowned academies in Frankfurt and Düsseldorf, among others with Thomas Bayrle and Jörg Immendorff. He is considered an important representative of New Figuration in Germany. His works have been shown in numerous exhibitions to date and are represented in several collections.

Leif Trenkler’s painting style spiritually seduces and whisks away the viewer in equal measure. In his pictorial worlds, he plays with our deeply felt longing for a carefree life and to while away the time in select idyllic earthly paradises to escape the hustle and bustle of our own largely synchronised everyday life for a counter-world of mindful idleness. The motifs, captured in harmonious compositions, trigger the viewer and transport us for a moment to tropical landscapes and dream beaches, to blissful scenes from the land of unlimited possibilities, all the way to Mediterranean summer retreats in that land where the lemon-trees are well known to bloom.

Water and pool landscapes with splendid bungalows and villa architecture, embedded in an impressive natural setting of reeds, palm trees, orchids and cedars, together with a not infrequently deliberately exaggerated sugary-sweet colourfulness of contrasting chromatic values, set a counterpoint to grey everyday life and invite the imagination to ostensibly indulge in carefree dreams. The places are mostly deserted and where figures do appear, they become the staffage or placeholders for our own identification. The images therefore become a surface onto which the individual projects their escape plan to the possibilities waiting in the wings. But then again, we feel like a hopeful lottery player catching a glimpse of the empty, unused homes of the rich and beautiful, which sometimes seem like golden cages of a loneliness lived shut off from life.

In a way, Trenkler’s paintings can be understood as a contemporary luxury adaptation of the ancient “Arcadia” myth, that transfigured, idealistic idea of a place during the Golden Age where people live freely in harmony with nature without any laborious work and worries. But just as the myth of this pastoral idyll is to be understood as an ideal, which hides the harsh reality of a shepherd’s life in the midst of untameable nature in favour of a romantic idea of freedom, Trenkler’s pictures also ultimately show illusory idylls with an inherent strange and wistful melancholy. Like the last glimpse of the sea for a long time at the end of a holiday, they harbour the knowledge that a permanent life of carefree contentment is a barely attainable state and therefore an illusion. Time out, rest and freedom remain temporary and are the safe mode of an everyday life committed to productivity, which makes short-term moments like these possible for us in the first place. As a result, the scenarios presented by Trenkler seem strangely alienated and far removed. Like dream images, they embody a constructed model character that refers to reality but does not literally depict it in “detail”. Trenkler’s figurative compositions deliberately condense the reproduction of the representational with the alienation effects of abstraction. The appearance of his transposed motifs is composed of detailed passages with nuanced colours, such as can be found again and again in the set pieces of nature in his paintings, which accurately reproduce the incidence of light and its play of shadows in different shades of green. But Trenkler combines these elements with sharp-edged, uniformly designed areas of colour, such as can sometimes be found in the depiction of the sky, flat roofs, walls and floor slabs, etc. Here the colour asserts itself in its own tonal value, construction details fade away, shadows are missing as a reference to reality here and there or occasionally develop a pictorial life of their own as clearly schematically reduced forms that refer beyond the impression of reality.

Again and again, Trenkler refers to recent as well as older art history in a totally unique way. The choice and implementation of his motifs borrows from Pop Art and brings to mind the pictorial worlds of David Hockney as well as the two-dimensional, reduced figurations of Alex Katz. Then again, there are references to the Old Masters’ art and subject areas. Like them, Trenkler likes to paint on a wooden background instead of canvas. He sometimes combines his motifs with the background of mythological sagas, be it the aforementioned “Et in Arcadia Ego” or the tongue-in-cheek title of a painting with two boats, which he calls “The Argonauts”, thus creating a mental association with Homer’s “Odyssey”, which tells of the hero Jason and his sailors in search of the “Golden Fleece” and its subsequent theft. It seems as if the idle pleasure-seekers’ actions in Trenkler’s painting are pursuing a higher purpose or simply the longing for a self-determined, meaningful adventure. An Old Master reference becomes particularly clear, however, in the chosen compositional scheme for his painting “Flirt”, which is figuratively reminiscent of an annunciation scene and is able to dramatically exaggerate the supposedly trivial moment of a fleeting pass in the picture.

The beach scene, in sun-drenched, Caribbean colours, shows a boy and girl meeting under a palm tree. As in the depictions of the Annunciation of Mary by the Archangel Gabriel, an approach is being made here in the encounter that is formally kept strictly separate though by the deliberate use of compositional devices to allow the heavenly and earthly spheres to meet in the moment, but not merge. Whereas meticulous care is taken by the Old Masters to ensure that the angel’s billowing robe does not, for example, cross the floor tiles like a dividing line to Mary’s sphere, in Trenkler’s work it is the central element of the palm tree that ostensibly appears to be incidental but spatially separates the young man with the glass from the beauty in a bikini and yet allows them to make eye contact with each other. And while in the Old Masters there is often a boundary in the form of a suggested balustrade that separates the pictorial space with the sacred event of providence from the profane space of the viewer like a barrier, in Trenkler’s work the blue flowing shapes of the shade from the tree in the sand, which begin at the lower left edge of the picture, could be seen as a boundary for the viewer to a world full of promise that may one day be fulfilled, which they are already standing on the threshold to. 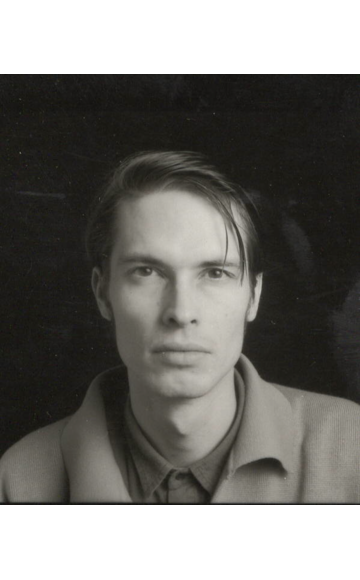