With the“Entrückt” (Detached) group exhibition, Galerie Wolfgang Jahn in Landshut is showing five artistic positions from its programme, all of which take an individual approach to figurative art. But as the exhibition title suggests, the works by Harding Mayer, Heng Li, Martin Schnur, Martin Veigl and Kate Waters are less about a purely aesthetic, realistic reproduction of reality. The works tend to elude an unambiguous and one-dimensional interpretation and thus appear “detached” from reality. It is not uncommon for the art shown here to leave the viewer in baffled amazement. As often the visually conveyed information remains cryptic, mysterious and enigmatic, strangely distanced, obscure and alienating.

The pictorial worlds of Austrian Martin Veigl, born in Steyr in 1988, show us photorealistic body aspects of people strangely focused on themselves. Flâneurs who not infrequently seem like remote-controlled day-trippers and who, despite their coming together in the picture, act in a peculiarly isolated way. Their eyes are hidden behind sunglasses, are closed or only half open as if lost in thought. Sometimes you can’t even recognise a physiognomy when Veigl shows us the characters overlapping or completely backwards. What is captured here by the artist in the picture not the staging of a specific moment, but a random coming and going together with indiscrimate gestures. It almost seems as if in preparation for his compositions the painter had taken snapshots en passant of people in the crowd, who thought they were completely unobserved in their momentary self-absorbed activity. Condensed into a picture structure, those protrayed seem frozen in their inconspicuous gestures and facial expressions. Despite their summery clothes and the pointed portrayed idleness, they nevertheless exude an air of melancholy and dreariness as they tread their lonely and self-absorbed path in the crowd. But the most obvious thing has not been said yet. Veigl completely dispenses with localising the events pictorially by having his passers-by act in front of pure colour surfaces. Together with a gestural abstract application of colour that appears almost arbitrarily at various points in the picture as an alienation effect, overloading whole parts of the picture with intrinsic colour value, the scenery is not only divided into foregrounds, middle grounds and backgrounds. It also becomes a distorted image detached from reality, without this seriously disturbing the strollers in what they are doing. What remains is an impression of aesthetic unease in which, despite the lightness and carelessness conveyed by the colours, deep fractures are inscribed in reality. Through the partial dissolution of forms, the concrete present increasingly becomes a nebulous past.

The paintings by Martin Schnur, born in 1968 and living in Vienna, are also disturbing due to their deliberate decontextualisation. In the interweaving of different levels of reality and locations into completely unfamiliar, even irrational-looking pictorial settings, his works appear to be mysterious dream sequences, like those generated individually by the subconscious in sleep. For as long as the dream lasts, they seem real and coherent before they evaporate again in the rationality of the waking phase. But in Schnur’s work, they are permanently captured in the picture. They remain pictorial riddles that are difficult to decipher completely and with certainty. Modern man in isolation from the nature that originally surrounds him, who is confronted with himself not least through reflection motifs integrated in the picture, is a recurring and varied theme here.

In contrast, the paintings by artist Heng Li, born in China in 1979, have a rather mystical effect. They show precise and finely structured grass landscapes under spherical sky formations with impressive light phenomena that magically illuminate and flood his pictorial worlds. His works seem supernatural, almost religiously motivated or spiritually charged. They do not feature any people. And yet one has the impression that the grass depicted seems flattened in some places, as if there had been a human campsite there until recently. Or perhaps the trace of other life forms landing? At the same time, in the interplay between the enormous cloud formations and the sky’s partly exaggerated colourfulness, you might think of the consequences of a nuclear disaster, in the aftermath of which only the remnants of a landscape can stand their ground.

At first glance, the sepia colours of the ink drawings by Kate Waters, who was born in Canada in 1964 and now lives in Düsseldorf, look like slightly overexposed vintage photographs of simple North American suburban scenes, reminiscent of the aesthetics of great photographic models such as William Egglestone. In a skilful and elaborate creative process, Waters succeeds not only in accurately and precisely reproducing supposedly random motifs and everyday scenarios, but above all in capturing the special nature of their inherent mood and atmosphere. You can literally feel the shimmering heat of a summer’s day beginning or ending, with its sky flooded with sunlight. It is characteristic of Waters’ works that they remain mysterious and vague in their message alongside an almost hyper-realistic depiction. Like a film still from a Hollywood movie, they create a tension in the air despite the supposedly arbitrary nature of the scene. Why does Kate Waters show us these deserted places that only reveal traces or relics of human existence? Or are they crime scenes where something terrible has happened or is about to happen?

Finally, the paintings by Harding Meyer, born in Brazil in 1964, also appear strangely detached. His works, often in large format, confront us with portraits of women focusing on space and the viewer with intense gazes. Sometimes there is something vulnerable and melancholic about the protagonists, whose faces are portrayed from the front or in classic three-quarter portrait. And yet, in their realisation, it is precisely these portraits of women that can undoubtedly be interpreted as proud and unwavering assertions of femininity. The usually oversized presentation leads to a distortion of scale and thus ultimately to an exaggeration of the representation, which thus takes on almost sacral, or at least exaggerated features. Harding’s painting technique, which sets the scene for details, as it were, but then again reveals a gestural, almost coarse painting style in which faces and backgrounds on the surface of the picture are composed of spatulaed individual areas, also makes the people appear distant and ultimately a little detached and unapproachable, as if through a transparent veil, despite their immediate presence. 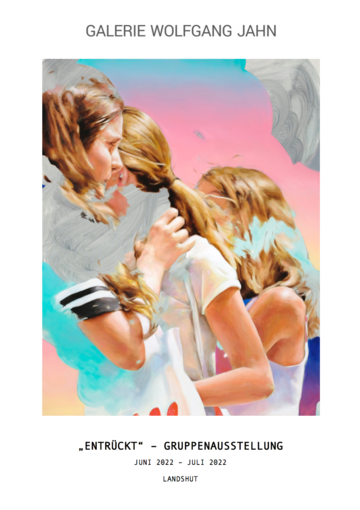