With the "REFLEX" exhibition, Galerie Wolfgang Jahn in Landshut is showing selected pieces from the graphic art oeuvre of Bernd Zimmer (*1948 in Planegg), which has been an essential part of his artistic work for over 30 years and is documented in his own catalogue raisonné. The focus is on woodcuts and lithographs, which are supplemented by an incisive selection of paintings as part of the exhibition to provide a coherent overall picture of individual series of works in their different technical implementations.

Bernd Zimmer, whose "South Seas" paintings are currently on show in a solo exhibition at the Museum Fünf Kontinente in Munich, and who has a show of his prints dedicated to him at the Museum Morsbroich in Leverkusen from the autumn onwards, is considered to be one of the main representatives of the "Neue Wilde" (New Fauves), alongside Rainer Fetting, who caused a furore from the end of the 1970s onwards with their "fierce" figurative painting based on strong colour contrasts.

Within his oeuvre, Bernd Zimmer's prints represent far more than just a tried and tested artistic means of implementing limited editions of his pictorial compositions. This is particularly evident in many of his woodcuts and lithographs, which are unique and deliberately run counter to the principle of reproduction as singular originals. In the same way, he sometimes chooses unusually monumental formats for this technique, such as those normally only found in this form in Franz Gertsch and Anselm Kiefer.

"Flucht II“ (Flight II), a unique work of art with the impressive dimensions 190 x 360 cm, is a monumental woodcut which shows two gnarled trees bathed in ghostly light against a black as night background. Not least because of the contextualisation of the title, it evokes an ominous scenery fed by primal fears and perceived threats. Despite the concrete subject, Zimmer's pictorial language is located at the threshold between abstraction and representationalism. The trees’ contours and shading as well as the suggested fairy-tale landscape are at the same time a free play of unfolding, expansive lines that become the gestural-metaphorical expression of a situation of unease with their jagged suspenseful structures reminiscent of scratches and cuts.

The motif of bare, towering trees is also found in Zimmer's paintings and lithographs, whereby the thicket of the trees and their ramifications appear almost like ink traces, which not only "draw" but also develop an abstract aesthetic life of their own out of the form and structure. Dipped into intense shades of yellow, red and green, these landscapes, which are reflected in the water, convey a gruesomely beautiful character, which oscillates between the pathos of an evening lighting mood and dystopian end of time impressions.

Other works show the thicket of a jungle hermetically separated from our living environment in an almost explosively drifting sea of shades of green. The unrestrained driving force of nature is impressively expressed here in a light-flooded frenzy of colour and unleashed form.

The water reflections of the "Im Fluss" (In Flow) and "Schwimmendes Licht" (Swimming Light) series often capture in monochrome colour the shimmering and contour-distorting play of ephemeral light reflections on a surface moved by waves in the perceptible dynamics of spinning and streaking amorphous forms on the static picture carrier.

The graphic art works from the series of "Tiki" paintings, which were created after Bernd Zimmer's stay in the South Seas, show yet another aspect of Zimmer's work, as the human image is usually completely omitted from his works. The anthropomorphic cult figures depict ancestors or gods in the form of block-like bodies with schematic reproduced heads and ornamental decorations. They can be understood as archetypes of human representation, which do not take the diversion of realism in the immediacy of their appearance. In Zimmer's works they appear in the expressive originality of complementary colourfulness, whereby the exaggerated colour intensity of these works can also be understood as a "reflex" to the intense light conditions in Polynesia.

Zimmer's shift to graphic art with its many different technical processes (woodcut – relief printing / lithography – flat printing) is remarkable for his artistic expression in that the supposed lightness of a spontaneous gesture, as expressed in a stroke of the brush, is hardly possible, especially in woodcut with its brittle and difficult to work with material which, unlike overpainting in painting, does not forgive any mistakes. Other creative methods and, last but not least, great effort are therefore required to create a similar aesthetic effect. 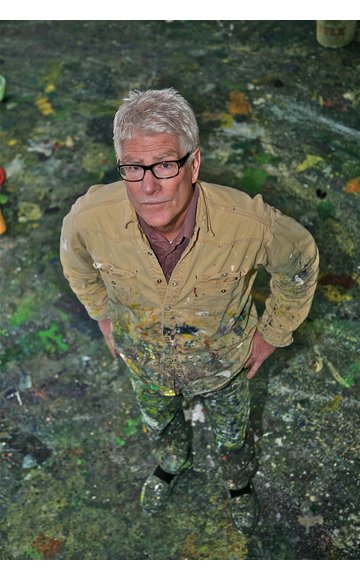