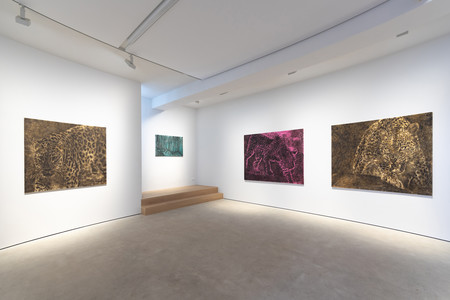 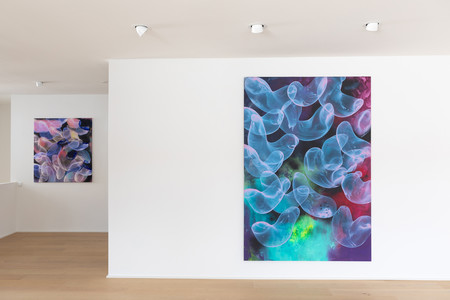 Galerie Jahn is delighted to open the third exhibition by Jiri Georg Dokoupil entitled "Leopardos y Burbujas" in Landshut.
Jiri Georg Dokoupil is one of the internationally best-known and most renowned artists of his generation. He was born in 1954 in Krnov in former Czechoslovakia and emigrated as a child with his family to Germany. He studied art in Cologne and New York. He mainly lives and works in Madrid and Berlin and can be described as a tireless inventor of new techniques and styles with countless patents.

As a founding member of the Cologne artists' group "Mülheimer Freiheit", he contributed significantly to the definition of the "Neue Wilde“ art movement. It propagated a neo-expressionist and striking style of painting. At the moment this new painting style gained worldwide recognition, Dokoupil began to turn to new pictorial languages and forms. He began to change his painting style substantially and develop new painting techniques for himself. Since then, his work has focused on a clear unique position and a consistent identification of his personal pictorial language. The pictorial techniques developed by him have been tested in his entire oeuvre, sometimes abandoned again and partly perfected and further developed by him to this day. For him, it is all about artistic development processes and in particular the constant perfection of the implementation of his pictorial ideas and techniques. This constant work on personal artistic progress enables him to continually produce images that, despite their conceptual and technical-methodical rigour, appear dynamic and powerful. Resulting in one of the most important works in contemporary art history being created over the years.

In the current exhibition, he presents, among other things, a series that is summarised under the title "Leopardos". These are black-and-white pictures produced with soot on canvas on partly coloured backgrounds. A burning candle is used to apply the soot as a black colour on the canvas hanging over the artist. The characteristic style of the painting is the result of the artist’s hand movements with the candle’s flame. The result are almost photorealistic pictures of leopards. The virtuosity of how this picture technique is handled leads to the pictures’ captivating elegance. These kinds of pictures can be found in various international museums and important collections. They make a significant contribution to the subject of realism.

"Burbujas" bubble paintings are shown in the second part of the exhibition. The new large-format "soap bubble pictures" are the result of research work that has been ongoing since the early 1990s. These are "alchemical compounds" of precious pigments and soap suds that combine with each other and whose mixing ratio was perfected by him over the years. Dokoupil shows the results of chemical processes in the form of beguilingly beautiful pictures. These images embody the deposits and results of drying processes. They look like molecular layers and elementary particles recorded with a microscope. The resulting organic forms reveal holographic tendencies and seem to correspond to such common parametric form-finding processes today. 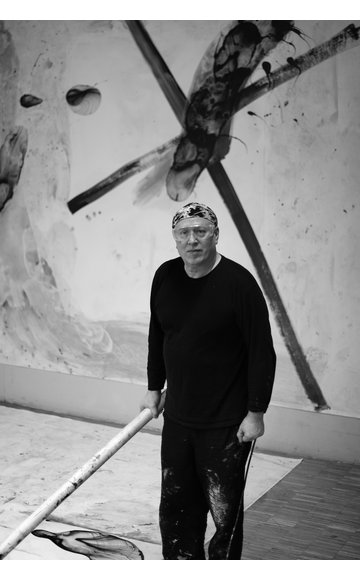